Last week, Santa sent a video message to each of my children courtesy of http://www.magicsanta.ca/homepage.html. The kids were all delighted except for my 5 year old, Bency who was perturbed that Santa stated incorrectly that Bency wanted a construction set and showed a picture of tools when in all actuality Bency wants an Angry Bird game that you physically construct yourself with blocks and shoot down the plastic replicas of angry birds with a sling shot. When Bency heard Santa’s mistake, he literally shook his fist at the computer and said, “Oh Santa, you got it wrong” in a gruff, exasperated voice.

On Saturday, I announced to the kids that we were going to see Santa in person. My 2 year old, Cesar had no idea what was going on but is always excited to leave the house. Bency grabbed his Christmas list and my 7 year old, Iris came out with a whole armful of things.

Iris clearly looked like she was ready for a business meeting rather than a friendly visit. She had a bag with a present she made for Santa, the letter she wrote to Santa asking for a ride in his sleigh Christmas Eve night (check out the post here for the full letter) and 5 toy catalogs that had everything she wanted, circled in red pen.

We arrived at the local museum that Santa and Mrs. Claus were visiting.

Cesar immediately ran over to Mrs. Claus, snuggled in and never left her lap during our whole visit.

Bency immediately walked over to Santa and set the record straight no less than 5 times that it was the Angry Bird game he actually wanted and not a construction set. The way Bency kept repeating himself, it appeared he was looking for an apology from Santa who obviously had no clue about his mix up.

Next up was Iris. She was ready to get down to business.

She handed him his present. 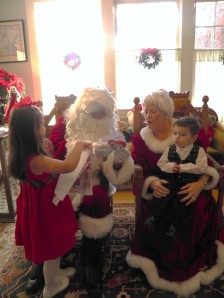 Iris handing her present to Santa

Next, she brought out her letter pleading her case for the Christmas Eve sleigh ride. Santa started reading it and after a brief moment he let out the loudest laugh or “Ho-ho-ho” and belted out, “Oh no, you can’t go on my sleigh, there’s no room for you with all the presents.” Mrs. Claus, unable to hide her surprise started rumbling with laughter too and said, “Oh no honey, I can’t even go on the sleigh with Santa either. There’s just no room.” 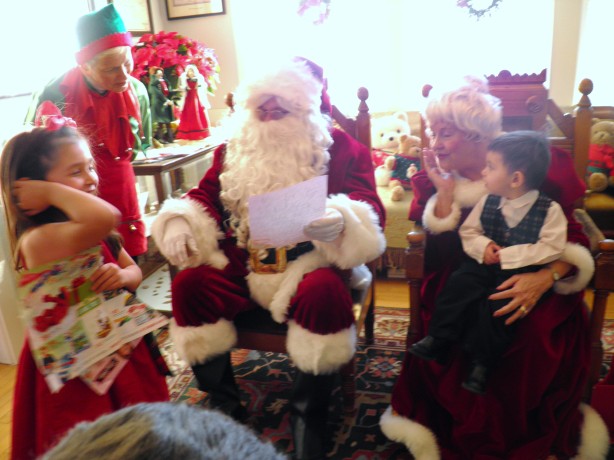 Everyone laughing when Iris shows Santa her letter!

Iris was slightly knocked down a peg but handed over her catalogs and started pointing out the things she had circled. A few of the choices Iris had indicated, Santa shook his head to and said those were awfully messy looking. The elf nearby, shook her head and said, “My, that does look messy.” 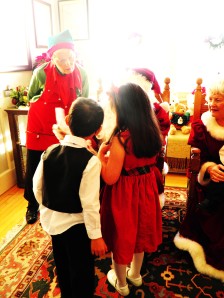 Everyone looking at the catalogs Iris brought and confirming everything is too messy!

After the kids said their good byes to the Claus’s we went on to the next room with a table filled with treats. Each kid picked out a cookie and was sitting eating when Mrs. Claus popped on back by us. No other children had come to visit yet so she wanted to get a cookie as well and talk to my kids a bit more.

The spread of treats for all the kids

Apparently, Iris had been holding out on Santa with one more wish. Perhaps, she felt she would be shot down after the head shakes to the messy things and denial on the sleigh ride. For whatever reason, she ran over to Mrs. Claus and said, “Can you please tell Santa that I would like a puppy for Christmas?”

Mrs. Claus’s eyes got wide and said, “Oh Iris, I can certainly tell him but you know a puppy also has to be on your parent’s wish lists as well.”

Iris said “thank you” in a melancholy voice knowing full well a puppy was not on her parent’s wish lists.

All in all, it was a good visit with Santa. Cesar got plenty of snuggles and hugs. Bency set Santa straight on his wish list and Iris…well, Iris’s business meeting didn’t go as planned but she’s a determined young girl and I’m sure she’s only fueled more to go back to the drawing board for next year!

All of the kids posing with Santa and Mrs. Claus