I’ve never been to the circus. My Mom swears I was. She thinks I was about 1 years old when we went as a family. My brother told me he hasn’t been to the circus since he was 5 years old and my sister was 9. Since they are 8 and 12 years older than me that confirms the fact that I have never been there. There’s been a lot of things that I said I never did and my Mom assures me that I did do them because I was in her belly or I was a baby. Good try Mom!

So when I heard the circus was coming to town this past weekend my husband and I gathered up the kids and announced we were headed to the “Greatest Show on Earth.” I was equally as excited as the kids to see what all the hype was about that I have only ever read in story books.

Before we left, I gave the kids strict rules not to ask for anything because would not be purchasing any of the overpriced food at the circus, but not to fear because I had stocked my purse full of Raisinets, Goobers and applesauce packets. Besides, I had a little surprise up my sleeve.

When we arrived they had all kinds of things set up for the kids to do. I knew about this ahead of time and had heard there would be elephant rides. I excitedly told the kids that the surprise I had in store was that we were going to pay for them to ride the elephants! They looked at me like I had completely lost my mind. They had no interest in riding an elephant. What?? Who wouldn’t want to ride an elephant? 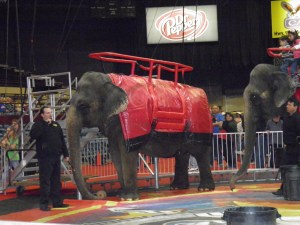 Seeing as my kids were party poopers and saved us $30 and I kept seeing them staring longingly at the cotton candy carts, I had my husband sneak over and buy them some of the fluffy pink and blue clouds of sugar. Now that was a surprise for them! 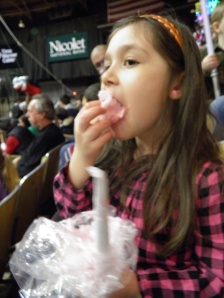 The circus was pretty great and it was nice to see the look of excitement on the kid’s faces.

When it was all over and done with I asked the kids what their favorite parts were.

Iris (7 years old): When they played the song “Who Let the Dogs Out.” I asked if she meant when all the dogs came out and performed their cute little tricks. No, she just really likes that song.

Cesar (2 years old): Elephants. He may have said elephants but clearly watching him rock his chair and try to get himself collapsed in the fold up chair looked like that was his most enjoyment during the show.

My favorite part was when Cesar started puking later that night from clearly eating too much candy.

All in all it was a fun time. I don’t know if we’ll ever go back. I’ve experienced it now. My kids have experienced it. And if my 2 year old grows up and says he doesn’t remember ever going to the circus well…..I have pictures to prove it!

See Cesar…You were at the circus!!!