Halloween is my very favorite holiday. I love doing projects this time of year and I had an idea the other day for a new one.

It involves using one of my favorite things: old photographs

Whenever I see old photos at estate sales I buy them if they are reasonably priced or free. I feel this strange need to rescue them.

A few years ago I picked up this 11×14 family photograph in a nice frame for $1.50 (yes, one dollar and 50 cents). Isn’t it sad that someone’s hard work of getting three young children dressed properly and looking nice is being sold for $1.50?

old photograph from an estate sale

Anyway, it’s been sitting in my basement waiting for me to come up with an idea to use it. During one of my weekly brainstorming sessions while ironing, the perfect solution popped into my head: I needed to use it for a Halloween decoration.

Yesterday, I sat down and set to work painting it for a new Halloween decoration for my living room.

This was a really fun and easy project. I feel a teensy bit bad for painting over it but not bad enough that I wouldn’t think about doing it again if I should find another big portrait at an estate sale for $1.50!

For more related Halloween projects and costume ideas I have done in the past you can find them all under the Halloween link under Categories on the right hand side of my blog page!

Have a wonderful Halloween everyone!

As you are all well aware I’m sure….Halloween is my favorite holiday! A small part of me believes that I had children for the sole purpose of dressing them up every year for Halloween! Children in costume brings out the best in me! Luckily for me, my mom can sew! She has been happy to oblige my requests (ummm…demands?) of cute costumes to outfit my children. Here is the history of my children’s costumes:

This is Iris in 2005. This is the only costume I bought brand new. It is a chili pepper and even though my family loves New Mexico GREEN chili, I still had to have it!! 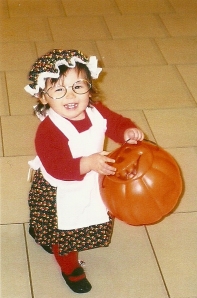 This is Iris in 2006. My mom made this “Halloween Granny” costume

The next year, Bency was introduced to the family. I made him wear the same chili pepper costume for tradition sake!

Iris in 2007 wearing the Jester costume my mom made!

In 2008, I wanted Bency to be a Bag of Candy and my mom delivered once again!

This is Iris in 2008 at the age of 3 as a Sunflower. I found the headband at a rummage sale and my mom made her a collar and little cuffs out of sunflower material!

At the age of 4 years old, Iris began dictating her costumes. She also dictated Bency’s costume. The dress she is wearing below was from the thrift store for 25 cents. We really got our money’s worth out of this because she still wears this. In my post here she just wore it out in public this past summer! My mom made the king costume! 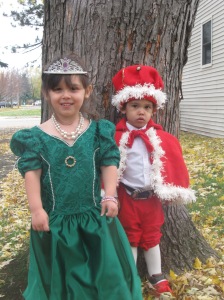 In 2010, Cesar joined our family and got to wear the chili pepper costume too! Iris requested to be a Kitty this year so my mom made her a skirt out of devilish kitty material and her kitty ears are from the store. Bency got to wear the same Jester costume that Iris wore in 2007! 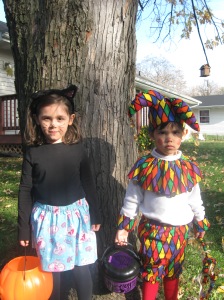 Iris and Bency in 2010 dressed up as a Kitty and the Jester costume makes a return! 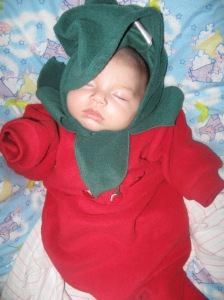 Cesar wearing the chili pepper costume in 2010…he didn’t quite fill it out as well the other two kids!!

In 2011, by some sort of miracle I made a costume suggestion and everyone agreed to it! Here are the kids wearing the costumes my mom made for The Three Blind Mice (actually, Cesar refused to be blind).

This year, Iris was back in charge. She wanted to be Jasmine and she told her brothers they had to be Alladin and Abu the monkey. They went along with it! Iris’s costume was found at a garage sale years ago. My mom made Bency his pants and hat. I already had a monkey hat (okay, I think it is actually a teddy bear…but use your imagination) for Cesar and the bottom part was found at the thrift store. I tried to dye it a dark brown but it didn’t work (surprise)! My mom made the little vest and hat to complete the costume! So here is my little crew from the story Alladin!

My crew this year!

I know this project has to be less creepy because I got the idea from Barney (yes, the big, purple dinosaur). I had no idea Barney was a crafty guy. My kids told me about this and made me watch the show Barney’s Halloween Bash (or something like that) on Netflix so we could recreate it.

I don’t think Barney had a name for this project so I’ll call it…Ghost Feet!

First, you lay the bag on the floor.
Next, you paint your child’s foot with the white paint and have them step on the paper.
Finally, you paint eyes and mouth on the foot which is now a ghost.

Okay, this SHOULD be a really simple, quick project.

I however, was not thinking ahead! Surprise! After I painted my first child’s foot, she hopped off the brown paper bag like I instructed her to do and got white foot prints all over the wood floor! Doh!!! Hence the wet rag on the supply list!

Make sure you wipe off your child’s foot immediately after you have them stamp their foot on the paper!!!

Also, painting a child’s foot who is very ticklish tends to get lots of paint everywhere too!

I think Barney just had a plate with paint on it for the kids to dip their foot in. Maybe Barney is wiser than me or perhaps I really love doing 5 minute projects and then spending a hour cleaning it all up!

Our project this past weekend!

P.S. Barney didn’t write “Trick or Treat, Smell Our Feet” on his. I’m still not as sweet as Barney!

It’s tough being a kid in our house at Halloween. My husband and I both love this holiday and we have forced our love on our kids since they were wee little ones.

You get thrust into pumpkins for the sake of cute pictures!

Bency at 4 months old getting the pumpkin shot

Cesar at 1 month old being shoved into the pumpkin…have to keep tradition alive!

You get laid in piles of leaves for the sake of cute pictures! 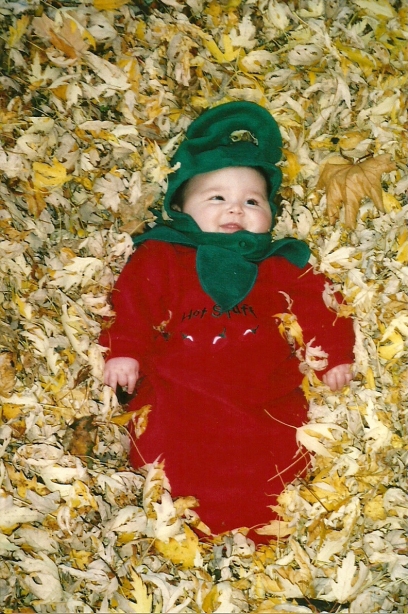 Iris at 5 months for her first leaf photo shoot

Bency at 4 months for his leaf photo op 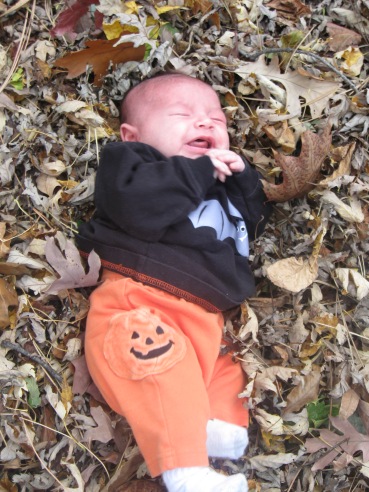 Poor Cesar at 1 month keeping up the tradition and hating every minute of it!

You are expected to help decorate the front yard with whatever crazy ideas your parents have.

The witch the kids help me make this year

When your Dad is an expert pumpkin carver; you must follow in his footsteps and create many pumpkin masterpieces starting at a very early age.

One of my husband’s pumpkins this year!

Bency working on his pumpkin this year 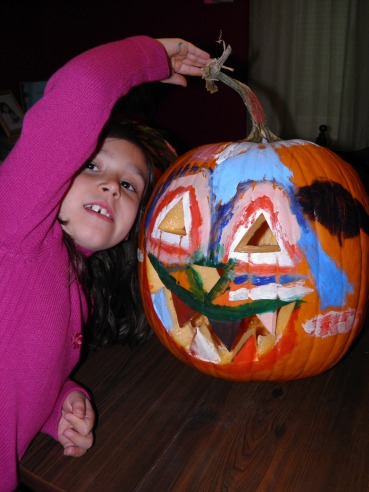 Cesar’s first year of getting to make his own pumpkin

Lastly, the hardest part of being a kid in our household is your Mom makes you wear Halloween clothes ALL month long! 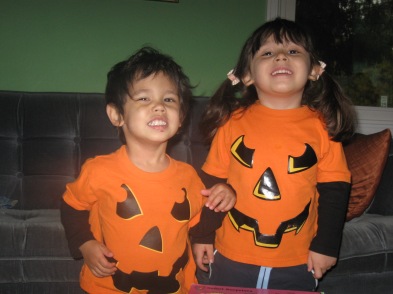 All three kids in Halloween gear in 2010 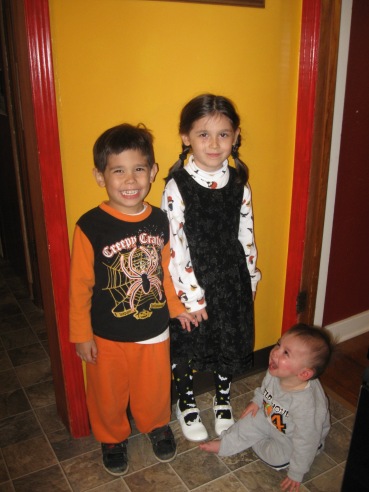 In case you missed it, check out our fun Halloween project…Spooky Barbie… we did this year right here!

When your hocus pocus is not going so well; take time to sit a spell, enjoy the beauty surrounding you and plot your next bit of magic. -Motherhoodisanart 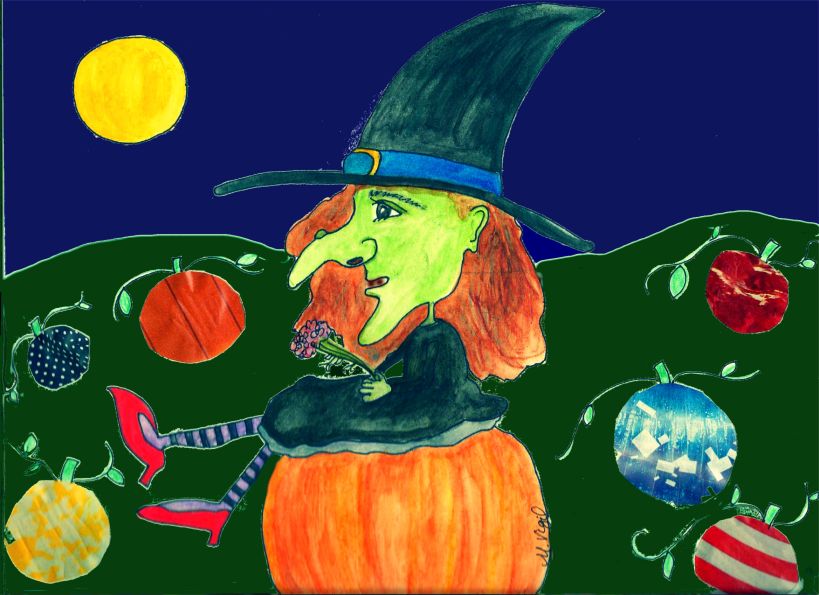 A painting I did this weekend

Hands down, Halloween is my favorite holiday. My love for Halloween can be contributed to the fact that it lands in my favorite season, Fall and that my strongest characteristic of being and doing things imperfect fits well with this holiday!

This past weekend my family jump started this festive season with a trip to get pumpkins and with a project I whirled up in my head.

I have dubbed this project: Spooky Barbie 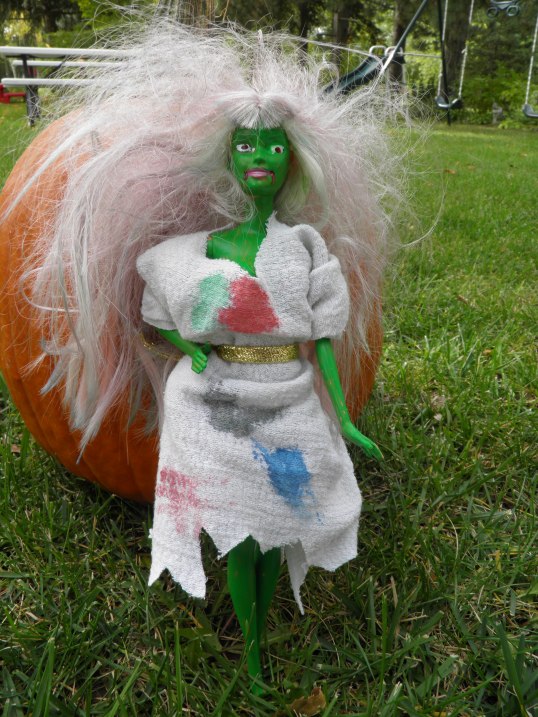 This project wasn’t really a stretch for me because as a child I LOVED giving my dolls haircuts and dyeing their hair with Kool-Aid.

This weekend I took it up one more notch though!

I knew full well that my daughter was not going to lend me any of her Barbies for this project so I stopped at a rummage sale and picked up two Barbies along with a bigger doll for my son.

The dolls from the rummage sale

This was a cheap, simple project and truth be told….I would love this project even if I didn’t have kids!!! 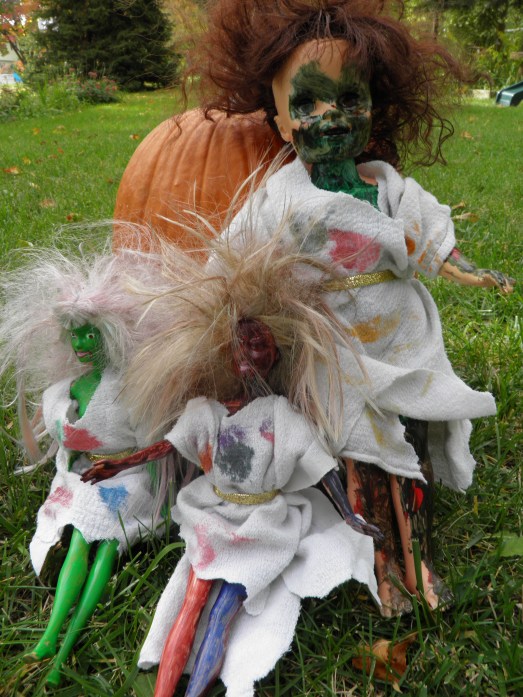