Do you lie to your children?

I tell them things like, “No, I didn’t put onions in the casserole,” or “We have to leave the park NOW. They are closing it early today,” or “Sorry, I don’t have any money for a bag of M&Ms.”

Two years ago I told my kids that there really was a place called Candy Land. This isn’t a lie. Candy Land truly does exist as I mentioned in a previous post called Yes Dear, There Really is a Candy Land.

Thanks to my mom, I really got to take my children to Candy Land this past weekend.

My mom has spent the last 6 months creating Candy Land in her backyard for my kids and many more. She found almost everything at rummage sales or the thrift store and then went to work handpainting everything herself. She also made quite a few of the things with her saw and power tools. She is truly a remarkable lady who brought so much joy to kids and adults alike with this labor of love.

Enjoy the photos that I captured on that glorious day!

That’s my mom on the side of the tree who created all of this! 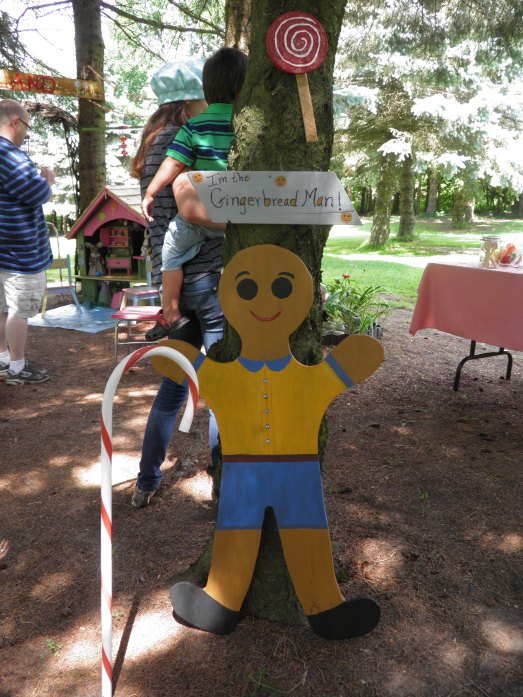 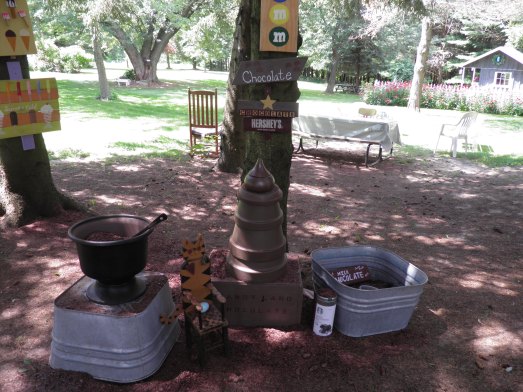 This chocolate area was really cool. The pots are filled with cocoa bean mulch which really smells like chocolate. The kids had fun digging in it! 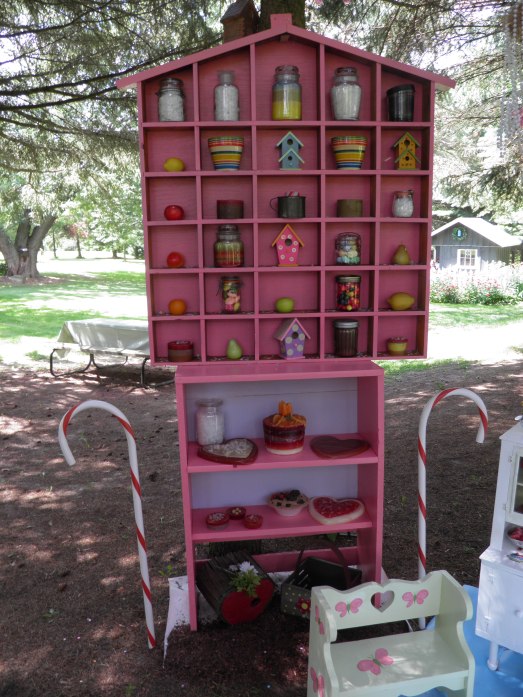 All of the children’s furniture is stuff that my mom found for a couple of dollars and then fixed and painted! The treats on this cupboard were made by mom out of wax!

This is an old manger converted into a little house!

These decorations were bought at after Christmas clearance sales

This cupboard was full of dishes and the kids had a ton of fun playing tea party!

My mom made tons of little cakes and treats out of wax!

One of the doll houses my mom painted and decorated 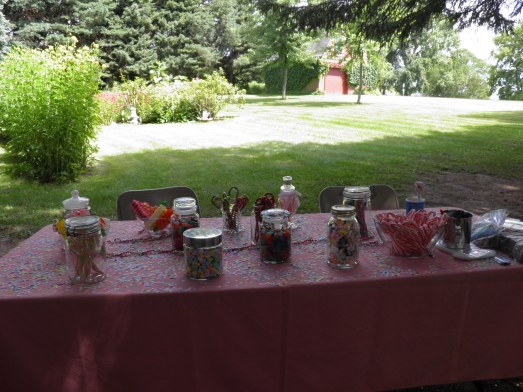 The table of candy

My mom also cut boards and painted all kinds of signs 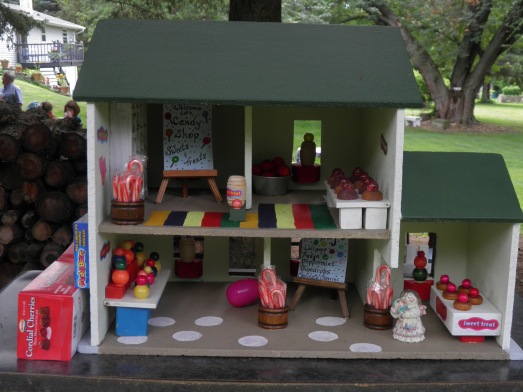 Inside the candy house. My mom decorated this. She used blocks to make the furniture

All of the kids playing a game of Four Corners to burn off all of the sugar they consumed! 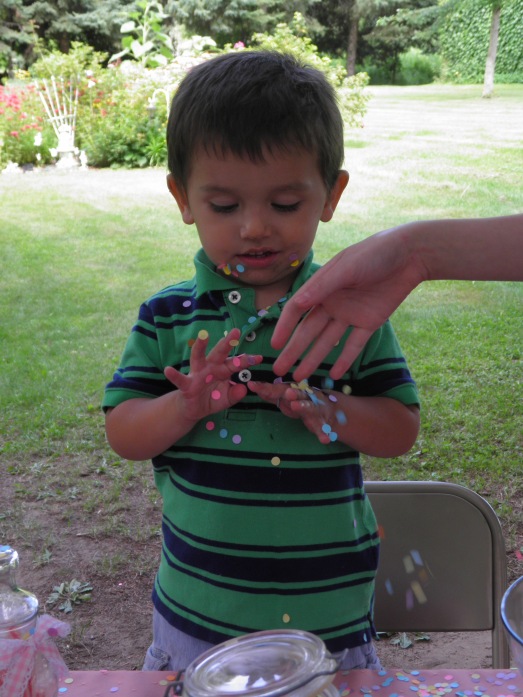 My son was so sticky by the end of the day that all of the confetti on the candy table was sticking to him. My brother said he must have contracted a case of the “candy pox”!

This was truly a remarkable event and one that the kids and adults alike will never forget!

As a child, one of my favorite television shows was The Cosby Show. I’ve caught a couple of reruns in the past years but the majority of my watching happened 25 years ago.

Miraculously, the stories and plot lines of this sitcom have planted themselves in my subconscious.

I first realized this last winter when my son was sick with the flu and running a fever. He asked what was going on with his body. Without a second thought I began to spin a tale about “germs having a party in his body.” I told him the germs were in his tummy having a grand old time dancing and carrying on. The only way to rid him of the germs was to drink lots of fluids and basically rain on their parade. I also told him that the fever was heating things up inside of his body and causing the germs to sweat and want to find another place to have their party.

As these words were coming out of my mouth I realized I had learned this from The Cosby Show. Clifford Huxtible had spun this same tale for Rudy when she was stuck in bed with the flu. I was in shock that I had remembered this and I was grateful to Bill Cosby for giving me this wisdom.

Flash forward to this past summer. I am pretty strict on bedtimes at our house. Even in summer I put the kids to bed at their normal bedtime. The kids are pretty good with this but one particular night they questioned why they had to go to bed and why the parents got to stay up late.

Out of my mouth came, “Tomorrow YOU can be the parents. You decide what you eat, what you do and when you go to bed.”

I had no idea where this came from. My husband’s eyes got HUGE and he look horrified by this statement I had just blurted out. I was stunned I had said it too.

It suddenly dawned on me. The Cosby Show! Dr. Huxtible let Rudy stay up late one night watching late night talk shows and old cowboy movies after she complained about an early bedtime. Once again, my subconscious came alive and I was reliving my favorite childhood show.

The next morning at the beginning of our “experiment” the kids told me what they wanted for breakfast. I made it and they ate it. They then asked me if they could eat some of their candy they had received at a parade. This would never be allowed on a normal day but today THEY were the parents so I told them they could. Their mouths dropped open at this exciting prospect!

The rest of the day they had fun with the lack of rules and regulations placed on them and took full advantage of their new freedom.

When night fell upon us, my husband and I said good-night to the kids and told them to have fun. The looks on their faces read of utter disbelief that we had made good on our promise and that they were allowed to stay up as late as they wanted and watch tv.

The next day was absolutely horrendous!

I have never seen my children so grumpy and irritable. I’m sure they both had tummy aches after a day of consuming too much candy. I’m sure they were both so tired they couldn’t even see straight.

I never said a word and we somehow managed to make it through the day. Both kids ate healthy and were in bed at their normal time.

Flash forward 3 months later to present day. Neither kid has asked to eat obscene amounts of candy nor has either kid asked why they have to go to bed early.

Thank you Bill Cosby for lodging yourself in my subconscious and giving me some great parenting wisdom!

My 7 year old daughter, Iris, started brushing her own hair now. The other day she came out and asked me to help her, stating, “I have too many CRINKLES in my hair.” We started laughing and she brought up the days of CRINKLES! I had almost forgotten about those days and couldn’t believe she remembered.

Back when she was 3 years old, she had snarly hair and screamed and whined when I brushed it, much like many little girls with long hair, including myself. My mom struggled with me as a child, combing my unruly hair. After years of frustration and lack of cooperation on my part she finally gave me the Dorothy Hamill haircut. Many girls my age know about this style of haircut because like me they fell victim to their mother’s years of frustration and got all their hair cut off too!

Me in 1st Grade

The CRINKLES Iris was referring to was a sort of game I came up with when she was 3. When I would go to brush her hair in the morning I would begin by examining her head. Next I would act shocked, surprised, and put my hand over my mouth. She would ask what the matter was and I would tell her the Grinch (yes, from Dr. Suess’s The Grinch Who Stole Christmas) must have sneaked in her room at night and put candy all throughout her hair! The Grinch was the only character I could come up with that I knew she knew and that would possibly sneak into a child’s room and do such a preposterous act!

I would begin by combing her hair and if I found a tiny knot I would say “I’ve found a little crinkle!” (I quit calling them snarls because they had such a bad connotation at this point.) If I found a BIG knot I would say, “Oh my goodness, I’ve found a Tootsie Roll in your hair.” I would work on the knot and when it was all out I would hand her an imaginary Tootsie Roll and we would both pretend to take bites of it and laugh! We would find several more pieces of candy in her hair and have us a smorgasbord early in the morning!

This system worked well! It got to the point where she actually looked forward to getting her hair brushed every morning and hoped there was snarls (I mean CANDY) stuck in her hair!

Now, if you were hoping to get some advice on getting real candy or gum out of your child’s hair you’ll have to keep searching. That has happened to us a couple of times and I just cut it out. Hair grows back! I only mess with the imaginary stuff!