The other day, my 7 year old daughter, Iris and I were snuggling together on our recliner.

I can’t remember the exact context of our conversation but I said something along the lines of “when you get to be an adult and move out on your own.”

She giggled and said, “Moooommm…I’ve told you before, I’m NEVER moving out. I’m going to live with you forever.”

I do remember her stating this but that was when she was 6 years old. I was sure her views had changed since then.

She continued on with her dialogue reiterating the fact that she was indeed living with me and her dad until the end of time. She explained that she would get married, have several children and they would all live in our small, cozy house happily ever after.

I was relishing in this prospect that we had a child that loves us so much that she can’t bear ever leaving us.

I know millions of kids probably say and feel this same way but I know one particular kid who during a day in his life didn’t.

When Alex was in 4th grade he was upset with his parents. Keep in mind Alex comes from a family of 8 children so even though he doesn’t remember exactly why he was mad my guess is that it had something to do with sibling rivalry!

So, Alex decided to run away from home.

In preparation of his long journey he lied and told his mom he needed 2 dozen cupcakes for a school event. She wasn’t happy with the short notice but stayed up late making them anyway.

Alex then packed his backpack with a few clothes and a few favorite things and wrote a good-bye note to his family.

In the morning he set out the door at the normal time he would be leaving for school with his few belongings and cupcakes in tow. He left his note on the kitchen counter.

He walked 5 blocks to the seminary student’s housing (priests in training). It was part of the church Alex’s family attended and Alex knew a couple of the men there very well.

Alex told one of the men, Roberto, his plight and explained that he was running away and just wanted to stop by and say good-bye.

Roberto was very kind, welcomed him in and offered to make him a big breakfast before he set out on his big journey. After breakfast, Roberto played board games with Alex and kept him engaged in conversation. (Roberto slipped away at one point and called Alex’s mom to let her know Alex was safe and that they were just talking). He never once tried to deter Alex from running away but only asked him very thought provoking questions about what he planned to do for money and shelter.

By late afternoon, Alex decided that running away was not such a good idea after all. He bid farewell to Roberto and headed the 5 blocks back home.

On his way home, Alex began to imagine how delighted his mom would be to see him. He bet she had been worried sick and would come running the moment she laid eyes on him and give him a big hug and kiss!

When Alex arrived home, his mom was there to greet him all right. Instead of pure delight she began tearing into him about all those darn cupcakes she had to make and about the fact he skipped school! It didn’t go quite as planned but he was happy to be home, safe and sound, with 2 dozen cupcakes that I’m sure got divided up amongst his 7 brothers and sisters!

So, this is why I am happy that Iris wants to live with us forever. We have not made her mad enough that she wants to run away from home yet.

As I continued to snuggle Iris on the recliner, I asked her more questions about her adult life. She told me she wanted to be a teacher and would need me to babysit all her kids while she was working. She also said she planned on going out on a lot of dates with her husband so would need me as well during those times so it really just made sense if we all lived together.

And if my bubble had not already been burst enough; she added, “Can you please try not to end up in a wheelchair or with a walker because you won’t be of much help to me then.”

I’m preparing myself for the request of a few dozen cupcakes anytime now!

My sweet Iris and I when she was 3 years old

Our 3 month stint of soccer is coming to an end. Only 3 games left in the season. Both our 7 year old, Iris and 5 year old, Bency played this year for the first time.

Iris had asked last year if she could play but I declined her request. Throughout the year, she checked out book after book at the library on soccer. When she asked again this year, I could hardly say “no” considering she is probably qualified to teach a college course on the subject. I thought Bency would be jealous if she was playing, besides, he needed an outlet for all his energy, so I signed him up too. 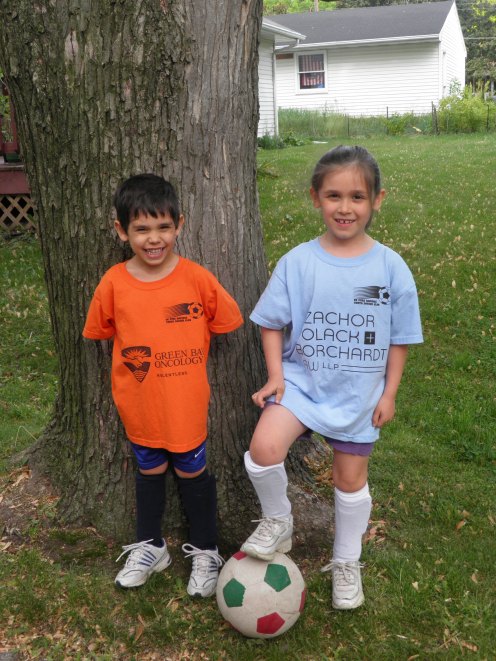 I didn’t realize both kids would be playing on same nights, very often requiring my husband to take one kid while I took the other. We would flip a coin as to who had to take Cesar, the almost two year old and who is determined to get on the soccer field and play too.

Iris did great! She listened to her coach and got all her skills down in practice. Once the games started she paid attention, was always with the ball but when her chances were there to steal it she never took them. It was like she didn’t want to hurt her opponents feelings!

Bency was a mess. I know as his mother I shouldn’t say that but… he was! He wasn’t listening to his coach, he would flop down on the ground for no reason mid drills, he would tease the girls and claimed one as his girlfriend even though she said “no” to his request several times. He started impromptu games of tag during the soccer games and he and a couple of other boys magically found sticks on several occasions and would play swords. His main motivation was to find out what snack would be served after the game. When other parents would ask me who my child was and I would tell them, they would nod and give me a sympathetic smile.

Over the past couple of weeks both kids have improved greatly. Iris is now seeing her chance and stealing the ball. Bency made two goals but unfortunately for the wrong team. The first time he did this, I had been preoccupied with keeping Cesar off the field and out of the corner of my eye saw Bency whipping down the field with the ball, all of his opponents were yards behind. I began screaming at the top my lungs “Go Bency!” It was only until the coach’s yells finally drowned out my own of “Wrong way Bency,” that I realized my mistake.

Last night the whole family was there to watch Bency. Iris’s team had a night off. We were all sitting there and Cesar didn’t try to run in the field once… only put his foot on the sidelines a couple of times and would turn back and give us a devilish grin. I noticed a look about Bency I had never seen before. He was focused. There was no games of tag. If there was a stick, he did not pick it up. He did not throw grass at any of the girls. I don’t know when this happened but Bency was serious about soccer.

During the second quarter, Bency got the ball at half field, and began driving it down (towards the correct goal). We were all yelling, “GO BENCY!” Cesar went wild and was jumping with his arms in the air screaming, “Go Bobby, Go Bobby!” (Even though Cesar can say Bency he has decided he likes Bobby better.)

Bency took it all the way down and scored the goal!! Everyone was so happy for him! One of his little boy teammates came and gave him a hug and said, “Good job Buddy!” Bency turned toward us and said,”Did you see that?” I did. It was a little piece of magic.

Bency continued to play good the rest of the game and then the real magic happened for Bency…. when he got to hand out the snack that he made all by himself!

Cupcakes Bency made along with his own soccer toothpick decorations