In the past, I’ve never had any arguments about clothes from my kids. I buy their clothes without any input from them and I lay out what they are going to wear each morning. They’ve never said a word.

My pediatrician once recommended that I begin giving my children choices when they turned 3 years old. For instance you should hold up two different shirts and let them pick one so they feel they have some control.

In theory, this sounds logical. However, I know my children. Their decision making process is long, drawn out, can take hours and they always regret their choice. This in turn has sometimes caused tears when they have picked plain M&M’s at the store and later wished they had chosen peanut.

I figure our system works so why mess with it.

My 5 year old son, Bency, has recently thrown a wrench into our fine working plan.

I also have a 7 year old daughter, Iris. You would think if it was anyone is causing me clothing stress it would be her. The closest moment of “clothing hysteria” she has caused me was when she was in Kindergarten.

I sent Iris to school in thick cotton tights striped with rainbow colors, a spaghetti strap undershirt and a purple corduroy dress that buttoned up the front. She looked absolutely adorable. Much to my surprise, Iris came home in the afternoon wearing only her tights and undershirt. She said she had got hot and taken off her dress mid school day. I was completely horrified that my daughter had been running around school sans purple dress. Since then, I have never bought a dress that buttons up the front, worried that she might mistake it for a cardigan again.

We need dresses that zip up the back!

Like I said, it is my son who is messing with my system after receiving a Christmas gift of an Angry Bird shirt from a friend of ours. Everything has changed. It is all he wants to wear. He doesn’t even want to take it off. I finally got him out of it a few days ago after I showed him the snot on the sleeve where he wiped his nose and the ketchup blobs on the front. He agreed I could wash it but as soon as it was out of the dryer he needed it right back. 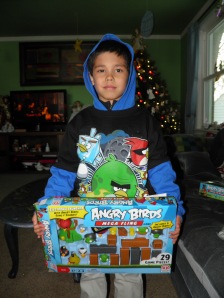 I’m sure this is only the beginning. I’m sure all of my kids will rebel at some point. If my two year old begins requesting Blues Clues shirts tomorrow, I will throw up my hands and move us all to a nudist colony. They certainly couldn’t mess with that system and the thought of no laundry sounds blissful!