Yesterday afternoon, my husband and I were on our driveway cleaning up from the yard sale we had this weekend. We looked behind us and saw a familiar figure cutting through our backyard. He had his head down and was making hurried, deliberate steps our way.

From a distance he appeared to be the 93 year old neighbor man we have known for 8 years who lives on our block. As he approached though he was almost unrecognizable. His always slender frame was now reduced to skin and bones. His face had an ashen hue to it and his eyes, once bright and lively were now replaced with a lifeless stare.

Bill and his wife Irene have always been some of our favorite neighbors. Bill owns a big tractor snowplow and plows everyone’s sidewalks on the block. They grow a huge garden in their backyard and deposit bags of tomatoes on our doorstep. When we are out walking we always stop by to visit them if they are sitting on their porch. They dole out Dum-Dum lollipops to the kids and invite them to sit on the large porch swing. Then they love to regale us with stories about the “olden days” and we love to hear them. I have heard the story about how they met no less than 10 times. Bill used to date Irene’s younger sister but then Irene stole him away from her. Irene tells me her secrets about how they had the perfect marriage. Irene has taken my kids into the house on several occasions and played piano for them while Bill takes me to the back room to show me his WWII memorabilia. He was in the Coast Guard and stationed in Hawaii during that time. He has several medals and plenty of photo albums that he has proudly showed me. He always takes out a picture of Irene in a bathing suit from that time and whistles.

As Bill sauntered over to us yesterday I said, “Hi Bill, How the heck have you been doing? I haven’t seen you in awhile.”

He stopped and looked at me and said, “Well, you know Irene passed away last month.”

I quick grabbed him and gave him a hug and felt his jutting spine beneath my hand. I told him how sorry I was and how much we adored Irene. He just nodded his head. I asked him if his son was at the house with him but Bill said his son lives too far away and has only been able to make it up a few times to handle all of the paperwork.

Bill started to tear up then and he threw his arms up in the air and said, “I’m all alone now” in a jagged voice.

He abruptly started to walk away again and we asked him if there was anything we could do to help out. He just shook his head and muttered, “I’m just all alone now.”

My husband and I watched him walk away in his old straw hat, his jeans cinched at the waist and his flannel shirt draping on him. We were paralyzed and didn’t know what to say or do. I wanted to run to him and tell him just to sit down with us but inside I knew his pride would have denied him from doing that. I just stood there in sadness for a long time watching that 93 year old man walking down the street alone. The same street that I have watched both him and his wife walk down together many of times.

Later last night, I looked up her obituary online and discovered that Bill and Irene would have celebrated their 70th wedding anniversary this coming Wednesday, May 1st. On Wednesday I will be paying Bill a visit with some chocolate chip cookies in hand. I hope he invites me in and I hope he pulls out those photo albums.

I hope he pulls out that picture of Irene in her bathing suit and gives a whistle.

I wrote a previous post about my Grandparents and shared a love letter my Grandpa sent my Grandma. I have another one to share with you today.

My maternal grandparents started courting in 1936 when my Grandma was 17 and still in high school. My Grandpa was 23 and had a teaching job in a one room school house a few towns away from where my Grandma was living.

My Grandpa in his school room in 1937

Even though this is when they started dating they knew each other since they were children because they grew up in neighboring farm houses. My Great Grandma never liked my Grandpa but I don’t know why.

My Grandpa’s Mom, Alice passed away on January 9th, 1936 leaving her husband, my Grandpa and a young daughter Bonnie to live at the farm on their own.

Even though I don’t know for sure, I would think all of these circumstances play a part in my Grandpa’s following letter to my Grandma. I mentioned in my last post that my Grandparents did not express their love outwardly but this letter truly proves that my Grandpa was a very sensitive, emotional man and loved my Grandma very much.

Well I hope you are not disappointed in finding this letter is from me instead of some other guy.

I got home o.k. last night, but I had to get up and get breakfast. Ruby and Art didn’t come back last night. Bonnie and Dad were back sick this morning. And I felt so darn blue I cried all the way to school.

It is noon now and have I felt mean this forenoon. I bet the kids think I am terrible. They have all gone out of the school house; because they are afraid of me I suppose. I wish you were down here; I would have you make out some tests for me. Not only that but I would just like to have you here. You seem to make my heart beat faster, and I feel as though it should.

I have got to take Dad to Readstown to-night. I think I will mail this then if I don’t forget it.

Gee I wish I could come up some night this week, but I am afraid I can’t. I have got to go to bed more and redeem myself for things I have been doing. I can just imagine what your mother thinks of me.

Well I know what I think of you any way. I think you are the sweetest darn kid I have ever been with, and I was never so darn crazy over anyone in my life. But the question is just what do you think of me. I have thought a lot about it and have come to no definite conclusion.

I shall be expecting a letter from you; if I get it I will be surprised and if I don’t I shall be disappointed. 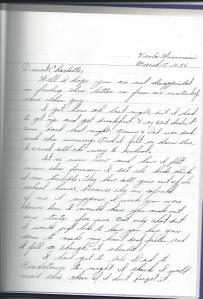 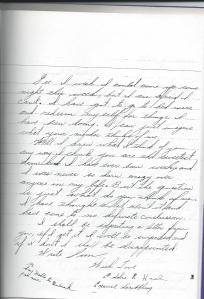