There is a beautiful beach a little over an hour from our house called Whitefish Dunes in Door County that is situated on Lake Michigan and is a little slice of heaven and almost makes us feel like we’ve left Wisconsin behind.

My husband and I started going there when we were dating. Our days there were always perfect. We would bring a blanket, a small cooler filled with sodas and a couple of sandwiches, and a trashy, celebrity magazine for me. I would lay on the blanket catching up on all the celebrity gossip and he would sit and build amazing sand castles. We would nap and swim on and off throughout the day. We would leave feeling refreshed!

As we started having kids, we would drag them along too along with several more supplies. The feeling of “being refreshed” has deteriorated little by little every year.

This past Tuesday marked the first time we ALL went to the beach (last year we left the littlest at grandma’s house). So this year it was my husband, myself, my 7 year old daughter Iris, my 5 year old son Bency and the almost 2 year old Cesar.

Our van was chocked full of essential items to make it an excellent beach excursion for everyone! Everyone was expected to carry armfuls of supplies… except for the baby who had enough of a plight trying to trudge through the deep sand by himself with his chubby little legs.

We made it to the “perfect” spot with 2 huge blankets, an enormous cooler stocked full,  a grocery bag of food, a huge bucket with tons of sand toys,  a backpack full of sun block, extra clothes, diapers  and other things to meet any medical emergency needs, and of course 5 huge towels. There was NO trashy magazine this time.

Throughout the course of the 6 hours we were there, we applied sun block several times on everyone, constantly handed out water and food, changed a poopy diaper; which is extremely difficult in sandy conditions and had to identify several foreign objects found on the beach by my kids…sometimes they were sea shells…sometimes just bird poop. We spent time in the water with everyone and some time playing in the sand. I had to retrieve the littlest one a couple of times…he had joined another family a little ways down. I think he was beginning to sense my fatigue and was hoping to be adopted by someone else before the day was done. My husband started another magnificent sand castle but the littlest one was quick to start destroying it. 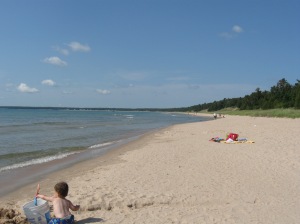 We got there early in the morning and were some of the first to arrive! 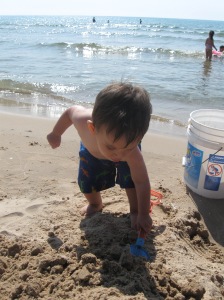 Cesar playing in the sand

Bency and Iris playing in the water

We buried Bency in the sand 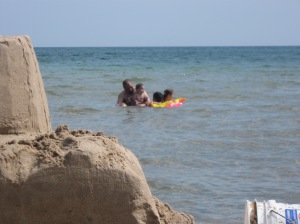 Dad in the water with the kids

There were moments though when I just looked around. I saw the kids laughing and having so much fun. Through my exhaustion I was content sitting in this little slice of heaven being a mom and doing all this stuff for my kids that moms do. It wasn’t about me. It was about giving my kids a really wonderful day and supplying them with a great memory.

On the way home to satisfy my need to know that I had just given my kids the best day ever I asked, “What was your favorite thing you did this summer?”

There was no doubt in my mind that they were going to say the beach. NO DOUBT.

They said…..”That we got to go the library a LOT this summer.”

A little part of me wanted to cry that a canvas bag, library card and an excursion a few blocks away was their favorite.

A little part of me wanted to scream in delight…”Next year we are going to the beach without the kids!!”