These fill our house on an almost daily basis between my 7 year old Iris and my 5 year old Bency. I think I would be better suited for “real” arguments over sharing or perhaps an occasional fist fight. EASY…send them to their rooms or take away privileges. No, instead I have got stuck with a multitude of dumb arguments.

Here are a few from yesterday and a few of my past favorite arguments!

I can hear escalating loud voices coming from the basement where the two kids are playing. Soon after, I hear pounding feet coming up the stairs and Bency yelling, “I’m going to tell Mom and you’re going to be in BIG trouble.” Bency enters the room I’m in and in a frantic, irritated voice tells me,” Iris doesn’t believe I love her and even though I have told her over and over that I do in fact love her, she won’t believe me.”

Me: “Iris…Bency really, really loves you…PLEASE believe him.” (Seriously, what do I do with that one?)

The kids are playing some imaginary game outside. They have brought out some stuffed animals and are putting them in the outside toy box. Iris is using a baby toy that has different colored keys on it and pretending to free the animals from the toy box by finding the right key. Iris and Bency begin arguing over which key will open the pretend lock…Iris screeches that it is the blue one…Bency tells her she is all wrong and that the only way the animals will be brought to freedom is if she uses the yellow one.

Me: I roll my eyes and walk back in the house. I refuse to get in the middle of imaginary lock and keys.

Argument from when the kids were around 5 years old and 3 years old:

Bency: “MOM!!! Iris is calling me a COFFEE CAT!” (Iris used to pronounce a lot of words wrong and he was indeed a “copy cat.”)

Me: I couldn’t say anything for a good long while because I had to sneak around the corner and laugh for a while.

Another argument from those 5 year old and 3 year old days:

Iris: “Bency, did you know those things that look like mountains. They are called pawncaynos (remember, she mispronounced a lot of words) and they spurt out hot coffee.”

Bency: “Iris, I believe what you are referring to is a VOLCANO and it spews fire which is called lava.”

Me: As much I was enjoying hearing this argument escalate, I did have to set Iris straight. 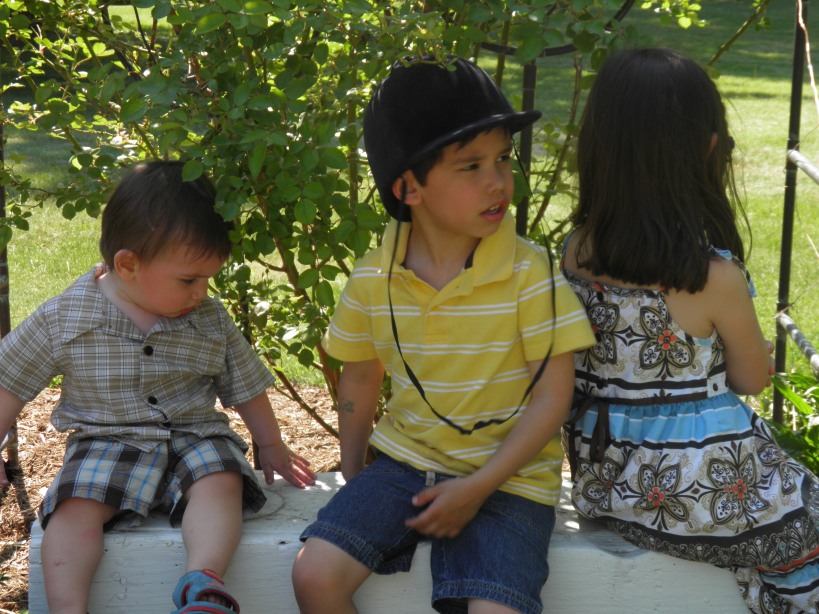 Iris was mad because she wanted to sit in the middle when I was taking this picture!

The other day I witnessed Bency accidentally bump Cesar (our almost 2 year old) as he was walking past him. It made Cesar lightly bump his head on his highchair. Cesar immediately looked to me and said, “Momma, Momma, Bency did it. Bency hit me head.”

I’m so super excited that little Cesar wants in on the arguing action. May the DUMB arguments never end!!!