I’ve never had to use my mind and creativity so much until I became a mother.

As a kid, the biggest creativity hurdles I had to overcome were ways to get my kittens to sit still so I could dress them up in my doll clothes.

As a teenager it was constantly trying to come up with new excuses for getting out of Advanced Biology.

As a career woman it was all about finding ways to perfect my selling skills so I could sell 30 cars a month at the dealership I worked for.

But nothing tops this Mom thing.

My daughter is in Girl Scouts and with that comes a sash that you apply iron-on badges to. Simple right? No, not for me. I’m notorious for overlooking small details. In the beginning of the school year, when she received her sash and a few badges I simply laid that sash on the ironing board and began ironing on those little patches. Unbeknownst to me, the sash has a top and bottom to it. Of course, I had to go and make it so her sash is upside down. It doesn’t fit right this way, looks really weird and falls off her shoulder.

I’ve been putting off the task of rectifying this because I really wasn’t sure how I was going to go about it. This week, it finally hit me that if I applied the patches with an iron, maybe I could get the patches off by reapplying heat to them. This worked! So the patches were off but there were gluey patches left all over the sash. I googled this dilemma and it said to apply lighter fluid to the glue. The problem is, I don’t own lighter fluid and I’m sure it’s not cheap. At this point I should have just thrown in the towel and went and bought a new sash but that is just not my style.

Instead, I lost sleep over this particular conundrum. I couldn’t stop thinking about it. I became obsessed with how I could once again fix another one of my mistakes! Then in a moment of clarity, it hit me! I could lay the sash facing down on a brown paper bag and iron out the glue! This worked fairly well and now we are back in business! 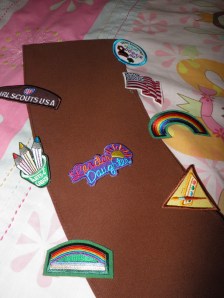 Now comes into play my second mind boggling dilemma of the week. While cleaning my stove last week I came upon a huge charred cylindrical object adhered to the stove top. I sprayed the bejesus out of that blob with my super strength cleaner. Amazingly, it didn’t touch it. After flicking at it with my fingernail I discovered it was a melted blue crayon that had obviously been put through the cooking process several times. How in the heavens did a crayon come to be resting on my stove top? I didn’t even bother questioning the kids as I’m quite positive the 2 year old is behind this heinous act. So after a week of trying to chisel it off with a knife and not getting anywhere, the simple solution of turning on the burners finally occurred to me. After a few minutes, the wax had melted enough that a quick swipe of a paper towel cleaned it all up lickety split!

So I sit here today with a clear head. All of our problems have been solved! Go ahead Motherhood… Bring It On! I am ready to defeat you and all the twist and turns you bring my way!